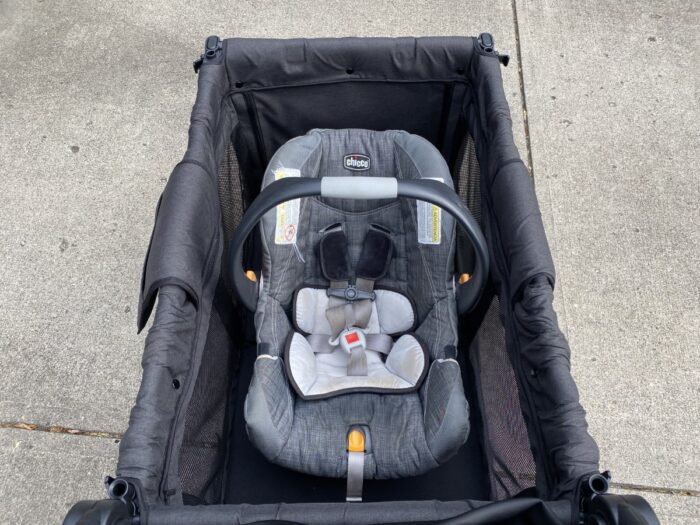 There are currently no car seat adapters available for any of the Wonderfold wagons. So what do you do if you have an infant who isn’t big enough for the Wonderfold seats?

Here are two products that are potential alternative solutions. 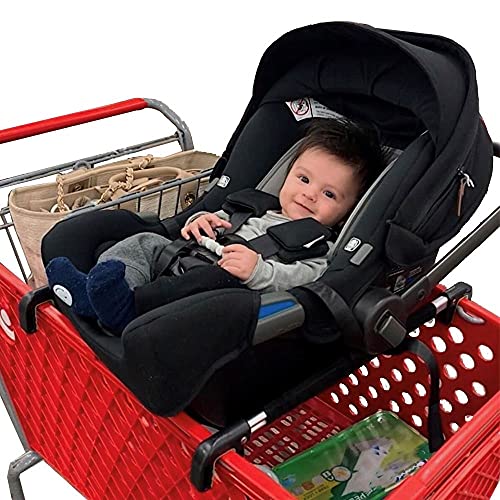 Totes Babies Car Seat Carrier is a hammock-like attachment primarily designed for putting a car seat in a shopping cart. The two metal bars span from one side of the cart to the other and in between is a fabric hammock where the infant car seat can rest.

Totes Babies carriers were not designed for Wonderfold wagons, but several moms have used them on both 2-passenger and 4-passenger Wonderfolds.

The carrier adjusts between 15 and 25.5 inches wide. The frame of the Wonderfold W4 is approximately 20 inches across so it is an easy fit. 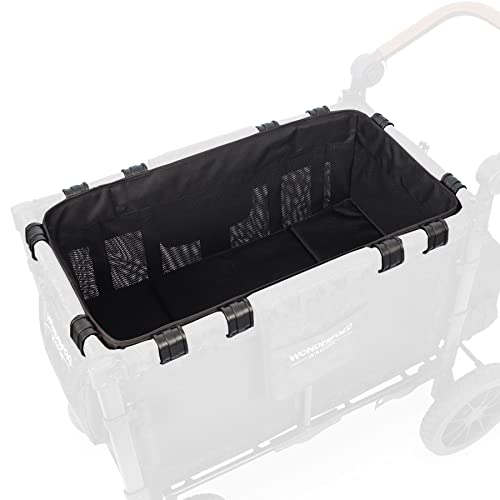 Wonderfold makes a bassinet insert for infants that hangs by clips from the frame of the wagon. There is a W2 Bassinet that works for Original, Elite and Luxe models.

The W4 Bassinet also works on the Original, Elite and Luxe models.

This obviously doesn’t help you with mounting a car seat but it provides a napping solution for infants. Babies can also nap directly on the base of the Wonderfold but the bassinet provides a softer, padded surface.

The nap mat takes up the entire wagon. It also takes some time to fasten the 12 clips it hangs on.

Using the Wonderfold Without a Car Seat Adapter

It is not safe to put an infant car seat in a Wonderfold without a car seat adapter.

Although the car seat seems to wedge in nicely, it is not attached. That means it can fall off if bumped or pulled on by a child.

You may also harm the car seat by trying this. Notice how the plastic, yellow, release button is resting on the frame? It isn’t made for that purpose and could potentially be weakened or harmed.

I’ve seen parents do this when the wagon was stationary at an event. It works but is not recommended.

Resting the car seat on the two inner seats is probably not a great solution either. It is less likely to fall, but you might not be able to get the resting angle of the seat correct, and since it isn’t attached, it is still a safety risk.

This Chicco Keyfit 30 car seat is one of the smaller infant car seats, and even so it takes up almost the entire inner space of the 4-passenger Wonderfold wagon.

Here’s what it looks like with the seats out.

The tightest configuration is taking the seats out and wedging the seat crossways in one end of the wagon.

In this configuration, there is potentially room in the wagon for another child, and the car seat is squished in enough that it isn’t going anywhere.

However, infants who aren’t old enough to hold their heads up need to be inclined back. This means the angle of the car seat needs to be leaning backward. This seat, as shown, is not tilted back quite far enough.